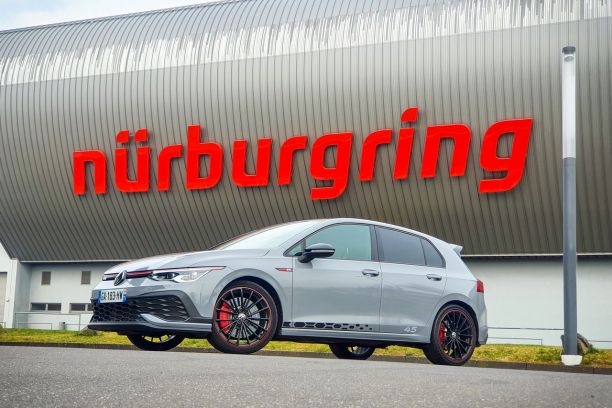 To celebrate the 45th anniversary of the GTI label, Volkswagen first launched this special series called Golf 8 GTI Clubsport 45. It has since been replaced by the Clubsport “just short”, displayed at a price of €48,865 before penalty.

Like the Golf 8 R with 320 hp and four-wheel drive, the Volkswagen Golf GTI Clubsport has a special driving mode dedicated to the northern loop of the Nürburgring. It remains to be seen whether this version remains up to par, despite 20 hp and less two-wheel drive.

In a band of ever more powerful and/or radical sports compacts, the wise Golf GTI was thought to be insensitive to provocations. And then, in 2016, the Golf 7 GTI Clubsport S was born, with a 2.0 TSI increased to 310 hp, a manual gearbox, four semi-slick tires and a three-door bodywork devoid of a rear seat to get the nice time of 7 min 47 s on the northern loop of the Nürburgring (ahead of the Mégane RS and Honda Civic Type R of the time!). In France, we had to make do with the “very short” Golf GTI Clubsport, but it still had an optional circuit pack that was precisely tested during our extreme test at the end of 2016.

History repeats itself almost five years later. In spring 2021, the Golf 8 GTI Clubsport 45 came alongside the classic GTI with power increased from 245 to 300 hp, torque increased to 400 Nm (370 Nm previously) and a Race Package combining specific 19-inch rims, exhaust Akrapovic and maximum speed released at 267 km/h after removal of the electronic restraint. A nice paraphernalia unfortunately disappeared on the GTI Clubsport “non 45”, remained in the catalog in 2022 with the rest of the improvements: electronically controlled front differential lock, specific rear spoiler, large brakes, not to mention the controlled suspension and its famous Nürburgring mode.

The engine in brief. We no longer present the 2.0 TSI Volkswagen, offered here in its ultimate EA888 evo 4 version with increased injection pressure. Its maximum torque and power ranges promise availability at all times (400 Nm between 2,000 and 5,200 rpm; 300 hp from 5,300 to 6,500 rpm!) and announce exciting performance: 5.6 s from 0 to 100 km/h and 267 km/h at top speed. Our test model was indeed a Golf GTI Clubsport 45, not affected by the electronic 250 km/h limit, and which also gave us a nice speed record on the German motorway…

Our opinion. Like what he feels in the Golf 8 R, the driver of a GTI Clubsport first wonders where the advertised horses are. Insensitive accelerator pedal, box shelling its reports from 1,300 rpm and inaudible TSI 300 make you imagine yourself at the controls of a TSI 150 version, or even less. Switching to Sport mode is therefore essential for the car to wake up. But we then curse against the unnecessarily aggressive DSG box management (see next chapter) and the too stiff suspension. The Individual mode arrives as a savior, since the engine and the sound can remain in Sport position, the suspension and the transmission in Comfort position.

Once properly configured, the GTI Clubsport reveals its endearing personality. The fiery 2.0 TSI yelps on acceleration, crackles discreetly on deceleration (thanks to the Akrapovic exhaust) and revs up in a sound slightly more hoarse than that of the Golf R (also relayed by the speakers, but a nothing more artificial to the ear). On the performance side, the R can also be chickweed, the GTI Clubsport climbing just as early, just as strong and without the slightest breathlessness near the red zone despite its 20 hp deficit. His insolence culminated on our famous portion of German highway downhill, despite a start under Launch Control logically less “catapult” in the absence of all-wheel drive.

The GTI Clubsport thus hit 296 km/h (!) on the counter at the end of the effort, i.e. 7 km/h more than the Golf R, who stumbled here on his electronic bridle (theoretically located at 270 km/h with the Performance pack, or even 250 km/h in the standard configuration). A result that is all the more astonishing as the counter remains precise, our GPS having recorded an incredible 292 km/h in maximum speed from maxi (downhill + wind at your back, what more could you ask for?). Showing 15,500 km, our test unit was certainly well established. But, in front of such a score, there is reason to doubt the power announced at 300 hp.

The box in brief. Unlike the Golf 7 GTI Clubsport before restyling, the Golf 8 GTI Clubsport no longer offers a six-speed manual gearbox. It imposes the famous seven-speed DSG and “wet” double clutch. As with the Cupra Leon cousins, or even Skoda Octavia RS, the gearbox control becomes impulse and replaces the traditional lever with a small rocker which makes passages in Manual mode only possible. via steering wheel paddles.

Our opinion. Able to mount its reports in the blink of an eye and without the slightest break in load, the DSG box appears ideal on paper. As often, it is unfortunately penalized by annoying electronic management. Extremely lazy in Normal mode (upshifting at very low revs, long response time when power is needed, freewheel mode at the slightest deceleration even without engaging Eco mode), management becomes caricatural in mode Sport: even when accelerating moderately, the gears refuse to go up and keep the engine at very high revs.

If the Manual mode corrects these faults on the road, it struggles to convince completely in circuit use. You often have to try several times to downshift during hard braking, while the gears go up on their own as you approach maximum revs… often at the precise moment when the driver decided to activate the right palette. Contrary to what happened with previous generations of gearboxes, this double operation fortunately no longer shifts two gears at once, but we would have liked more independence when the most radical driving mode is selected.

The chassis in brief. Still not very vocal about the precise evolutions of the running gear, Volkswagen announces a Golf GTI Clubsport lowered by 10 mm and with increased counter-camber at the front. It also features the DCC controlled suspension as standard, with a specific Nürburgring mode which makes the shock absorbers more tolerant of degraded asphalt. The progressive steering, more and more direct over the steering, and the limited slip differential, electronically controlled, are taken from the classic Golf 8 GTI. Our test GTI Clubsport 45 was fitted with Michelin Pilot Sport Cup 2s for the occasion, which were used during the official timer (7 min 54 s, i.e. 10 s better than the classic GTI) but which are curiously not offered in the official list of options. They will therefore be purchased after-sales.

Our opinion. A handful of bends is enough to understand that the Golf GTI Clubsport can sign nice lap times on the northern loop. It combines all the qualities to shine on this fast and bumpy track: a controlled suspension that perfectly absorbs deformations in Nürburgring mode thanks to a more flexible typing than the Sport mode dedicated to smooth circuits; a perfectly stable rear axle, which tacks just right when braking hard at high speed or when going over bumps above 200 km/h; a very direct steering serving an incisive front axle, which further tightens its trajectory on acceleration to gain a few km/h in the long curves of the northern loop.

This rigorous balance may frustrate drift enthusiasts (even the calls/counter-calls struggle to wind the car, which then brakes excessively when sliding), but the GTI Clubsport is far from being a boring compact. Despite the absence of all-wheel drive (and therefore of Drift mode), it even appears more playful than the Golf R, which showed more inertia when changing course, a more painful neutrality on reacceleration (micro-losses of traction of the Clubsport and the Yo-Yo of the engine speed which results from it contribute to the sensations!) and not the same impression of turning in one block.

The pneumatic mount dedicated to the track is obviously not unrelated to this. The Michelin Pilot Sport Cup 2 are much more efficient than the Continental of the Golf R (or the Goodyear Eagle F1 Supersport of the Cupra Leon 300 cousin), provided you monitor their pressure carefully. We have thus removed up to 600 g in the front tires and 300 g in the rear compared to the recommended data on the road. In this situation, you have to think about readjusting the values ​​before returning to the public road, especially before a new unlimited motorway session…

Braking in a nutshell. More powerful than the classic GTI, the GTI Clubsport logically increases its braking system. The front discs, now drilled, go to 357 mm in diameter and adopt fixed calipers with two pistons. The car actually inherits the assembly of its big sister Golf 8 R, more powerful by 20 hp and above all heavier by 93 kg.

Our opinion. This is the reverse of the superior grip of the Michelin Pilot Sport Cup 2 tyres. If they allow the braking points to be delayed, they more easily challenge the endurance of the system. In addition, the higher stresses and vibrations (due to the shift speeds pushed back into corners) seem to spread the disc pads further apart between two braking operations, forcing you to “pump” once or twice on the pedal so as not to be surprised by a race. overly long.

Even with this precaution, the pedal gradually loses consistency as the system heats up. But let’s recognize that, over the 20 km of the northern loop, the Golf will never have given us any “heat”. As often on a production car, the original pads will benefit from being replaced by models dedicated to this extreme use. Beware, however, of the loss of homologation on the open road, which theoretically prohibits their use on the northern loop (considered not as a closed circuit, but as a toll road).

Find the results of the test, the complete technical sheet, as well as the prices, equipment and options of the Volkswagen Golf GTI Clubsport on page 2.

Forget a caddy, this Super73 is cooler on the golf field

How do I stop that extreme sweating?