Variant Delta: 3 out of 4 infections would occur before the onset of symptoms

Pre-symptomatic transmission represents up to 75% of infections with the Delta variant. 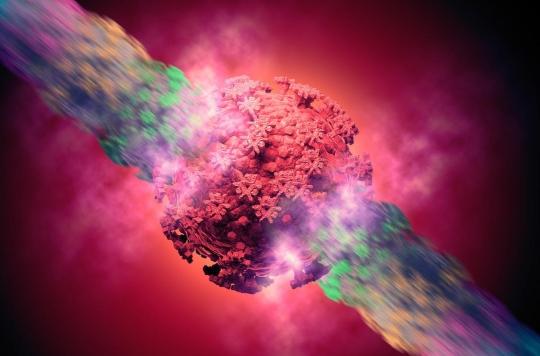 The spread of the Delta variant around the world has caused an epidemic outbreak that countries are struggling to control despite the progress of vaccination. In question, the high contagiousness of this variant, more than twice that of the original coronavirus. A new study, taken up on August 19 by an article in the journal Natureadds that this variant is capable of being transmitted two days before the onset of symptoms, that is to say for a longer time than what had been observed since the start of the pandemic.

A window of almost two days

This pre-symptomatic transmission could be behind the most recent surge in Covid-19 cases, say the Chinese researchers who conducted the study pre-published August 13 in medRxiv. Spread before symptoms appeared was already a feature of the virus but research suggests the gap between receiving a positive test and feeling symptoms was just 0.8 days. With the Delta variant, it increases to 1.8 days.

The researchers analyzed data from 101 people from Guangdong, a Chinese region, who were infected with Delta between May and June this year, as well as those of their close contacts. They found that on average people start showing symptoms 5.8 days after infection with the Delta variant while they first tested positive 1.8 days before. This gave individuals nearly two days to transmit the virus before showing any signs of their own contamination.

Three quarters of transmissions would be pre-symptomatic

Carriers of the Delta variant are said to have higher concentrations of virus particles in their bodies than people infected with the original version of SARS-CoV-2. “Somehow the virus appears faster and in greater quantities”, assures Benjamin Cowling, epidemiologist at the University of Hong Kong and co-author of the study.

The researchers suggest that nearly three-quarters of Delta infections occur during the pre-symptomatic phase. This high ratehelps explain how this variant was able to overtake both the original coronavirus and the other variants to become the dominant strain in the world”, believes Barnaby Young, a clinician specializing in infectious diseases at the National Center for Infectious Diseases in Singapore.

The researchers then calculated the R0, the basic reproduction number of the virus, which refers to the average number of people that the carrier of the virus is likely to infect. They estimated that with the Delta variant, the R0 is 6.4. This is much higher than the R0 of other strains, which range from 2 to 4.

Finally, the researchers reaffirm the need to be vaccinated to break the contaminations. Although they do not prevent new infections, vaccinated people are 65% less likely than unvaccinated people to infect someone else, they point out. This reductionis significant and reassuring that Covid-19 vaccines remain effective and are an essential part of our response to the pandemic”, concluded Barnaby Young.

Heat stroke: symptoms, duration, what to do?

How to reduce the symptoms of psoriasis?

Parkinson’s disease: what if eating too much fat accelerated the onset of symptoms?

Tendinitis: what symptoms? how to relieve it?

Alzheimer’s disease: symptoms loved ones should be aware of