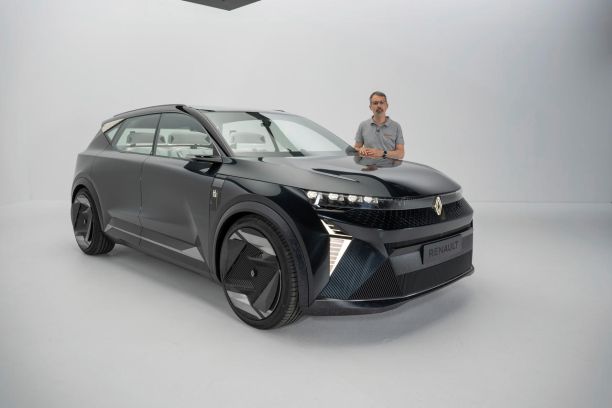 In 2024, a 100% electric compact SUV will join the Renault range. Its name: Scenic. Here is already a faithful overview of its lines.

To convince us of the merits of the change made by the Scénic, Renault is pulling out all the stops: realistic exterior styling, futuristic interior and electric/hydrogen engine full of promise. We are already in 2024, even in 2030.

Is it a discovery or a rediscovery? After thirty years in the guise of the minivan, the Renault Scénic will give itself a new lease of life in 2024. To make us wait and already prepare ourselves for this inevitable change, the Vision prototype occupies the media ground today. Because if he still intends to embody the family vehicle of the range, the Renault Scénic will change silhouette. As required by the times, it will abandon the habit of the minivan, will become an SUV and above all will switch to 100% electric.

When the Scénic does its show!

The Renault Scénic will follow the brand’s new stylistic logic and will become the big brother of the 100% electric Mégane E-Tech. Like her, it will be assembled in the Douai (North) factory. A consistency that can also be found in the project names. Indeed, the Scénic carries the internal code HCB, while the Mégane E-Tech hides under the name BCB.

Gilles Vidal, the design boss of the Losange, confirmed it to us: the lines of the concept car that you have in front of you very faithfully prefigure those of the production vehicle expected in two years. Nevertheless, in order not to deliver all its advantages too soon, which the competition could draw inspiration from, the Scénic keeps it in mind and keeps a few mysteries about its interior. This is why, that of the concept car allows itself to be prospective, futuristic at will if not pragmatic and realistic. Indeed, the rear doors with antagonistic opening and the structure without middle pillar will not cross the course of industrialization.

Finally, from this point of view, there is nothing new compared to the Renault R-Space concept car of 2011, which was at the time the herald of the Scénic 4 of 2016. But who cares? The 2022 model has breathed the spirit of the times and dazzles us. To start with a giant screen located on the horizon line at the bottom of the windscreen. This equipment, which extends from one pillar to the other, is intended to “erase” the bonnet and the front of the vehicle. The driver thus gains in visibility (24% better) with a viewing angle increased by 6.7 degrees. If it has little interest on the highway, the advantage is immediate in town, especially during maneuvers. Especially since the new Scénic no longer has a short, plunging snout; it features a high, horizontal and elongated bonnet.

On board, the slabs are present everywhere, with no less than ten small specific screens lining the cabin. The goal is to offer direct access to a function without resorting to a plethora of menus and sub-menus. A digital arsenal which, again, should significantly reduce the airfoil on the standard version. But this nevertheless opens up the field of possibilities and portends the brand’s future interior achievements by 2030. Because, for the standard Scénic, an L-shaped dashboard like those of the Renault Mégane E-Tech and Renault Austral should be rigorous. In its desire to tell us a beautiful story, the Vision offers its four passengers a connected interaction. We talk to each other via microphones housed in the head restraints, and no need to turn around: everyone has the other rear occupants in video on a dedicated screen.

Well seated in his chair with a specific design, the driver benefits from a modern steering wheel. With its joystick shape, it is more like the controls of a private jet than the hoop of a car of yesteryear. Upholstered in white fabric, the passenger compartment gives pride of place to recycling. Its polyester materials are designed to be reused over and over again.

A dress not very Renault?

On the outside, the style of the vehicle shows an evolution resulting in more fluid forms. But, if we remove the diamond at the front and at the rear, not sure that the general public will recognize a Renault. The look of the SUV with its full shapes and well-defined facets is reminiscent, here and there, of the visual register of a Skoda or a Volvo XC40 at the level of the very thick hood, but in no way a model from the French manufacturer. Indeed, certain details such as the facets on the shields, the folds at the top of the hood or the streaks in the paint rather evoke the camp opposite, with a lion as an emblem; the one from which Gilles Vidal comes. The rear, bearing sharp boomerang lights, is rather reminiscent of the Czech brand of the Volkswagen group. Fortunately, there is a small cosmetic affiliation with the 100% electric Mégane E-Tech, but the resemblance is quite slim.

The technical sheet of the Scénic Vision indicates a length of 4.49 m, i.e. 9 cm longer than the current Scénic 4 in the short version. But, specific electric platform requires, it is based on a wheelbase of 2.83 m, it is 10 cm better. Finally, with 1.59 m under the fathom, or 6 cm less, the car offers a more dynamic look. The concept is fitted with 21-inch wheels, compared to 20 inches for the current model. These rims are adorned with movable flaps optimizing aerodynamics at high speed and cooling of the brakes below 10 km/h. In the center, the diamonds remain vertical like the emblems of a Rolls Royce. It’s the prestigious touch!

TO READ. Renault Scenic. From minivan to SUV, a 30-year saga!

The electric/hydrogen hybrid: yes, but not before 2030!

Like any self-respecting concept, the Renault Scénic Vision brings its share of innovations. Precisely under his floor. Because, beyond its 100% electric propulsion, this prototype inaugurates a technology that skilfully combines electric and hydrogen. Its goal ? Carry out a course of 800 km with, halfway, a full of H2 done in 5 minutes. In short, the best of both worlds: the silence and virtue of electricity on the one hand, the autonomy of hydrogen on the other.

To do this, the CMF/EV technical platform has been thoroughly reviewed and its electric motor – that of the Mégane E-Tech with a power of around 220 hp – positioned on the rear axle. In addition, the car inserts in its floor, between the electric machine and the batteries, a 15 kW (about 20 hp) fuel cell powered by hydrogen. The tank, which can contain 2.5 kg of H2, is located under the front cover. But this idyllic alliance will not be relevant on the production Renault Scénic of 2024. At best, this electric/hydrogen hybridization will arrive in 2030. In fact, to reduce manufacturing costs and ensure the consistency of the Mégane family – as was the case at the very beginning of the Scénic in 1996 – the 2024 Scénic 5 will house its electric motor at the front and will not benefit from a Fuel cell. It will be purely electric and, as such, will only draw its energy from its batteries. Spectacular, the Renault Scénic Vision caused a sensation. It will then be necessary for the production model to transform the test and be sufficiently successful to convince the ultimate followers of the minivan. The others have already switched to the SUV.

Volkswagen Touareg (2023). This is what the SUV could look like