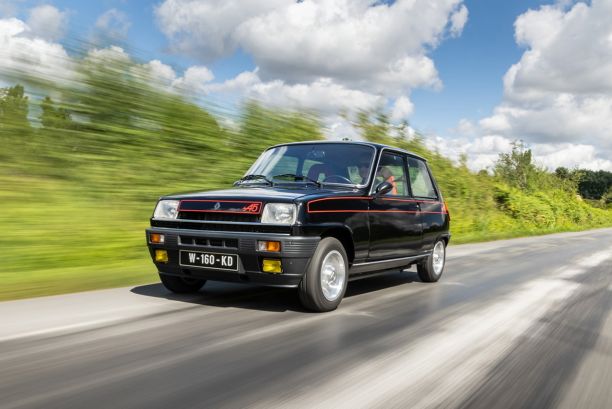 The Renault 5 badged Alpine: the start of an adventure that began in 1976.

The Renault 5 celebrates its 50th anniversary in 2022. To celebrate the event, we have chosen to take the wheel of the first sports version: the 5 Alpine. A true love of youth which has become very rare today.

Although the Renault 5 made its first appearance in January 1972, it took four more years for the Régie to offer it a sports version. The R5 Alpine was marketed in March 1976, and it opened up a new path for the Diamond manufacturer: that of small bombinettes after the Gordini era of the 1960s. More generally, the small Renault was part of a European movement which consisted of making sports versions based on popular. The year 1976 will also be that of the launch of the Golf 1 GTI. For yours truly who grew up with and in the R5, finding this emblematic model is a real pleasure. The 5 Alpine, Alpine Turbo and especially the extravagant 5 Turbo fed my passion for cars with the essential monsters of the 70-80 era, Countach and F40 in mind.

But back to our 5 Alpine, because we have the chance to take in hand the version belonging to the Renault Classic collection. This is a phase 1 which dates from 1978 and appears in immaculate condition after renovation. It includes some changes arrived the year before, such as ajar rear windows and Bobine rims replacing the Fergat. The 5 Alpine is distinguished from the classic R5s by its rims of course, but also by its California mirrors and its red borders with A5 logos. The lowered front bumper, which incorporates fog lamps, affirms the sporty look and also improves the high-speed stability of the small tricolor racing car.

Vibe seventies on board

The interior is of the same ilk after a carefully carried out renovation. The red upholstery of the time, the front seats with headrests integrated into the backrest (those of the R5 TS) and the padded roof lining smell good seventies. The fine and refined dashboard is certainly dressed in a black plastic a little cheap, but we don’t care. All is forgiven at the sight of the superb Iso-Delta three-spoke steering wheel, which advantageously replaced the very bland hoop of the Renault 14 seen on the first models. Last specificity of the 5 Alpine: the spare wheel takes refuge in the trunk since there is no more space under the hood because of the new engine and its more cumbersome air filter. The engine precisely, it is time to wake it up!

At the wheel of the R5 Alpine

The small French sports car does not bear its name by chance. The 5 Alpine, whose base is a 5 TS of 64 hp, comes out of the Dieppe factory with a number of modifications to gain in temperament. Thus, the engine sees its displacement increased to 1,397 cm3. It is also equipped with a hemispherical cylinder head, specific pistons and a revised exhaust manifold. The power peaks at 93 hp, while the chassis part is sharpened with the addition of anti-roll bars, new shock absorbers and R12 brake discs at the front (the drums are kept at the rear for a question of costs ).

What marks when you take a seat on board the 5 Alpine is the comfort of the seats and the peripheral visibility offered by the thin body uprights (we no longer know that today). The dashboard of this phase 1 is distinguished by its welcome simplicity, but it still lacks an oil pressure gauge and a water temperature indicator at the level of the instrumentation. Amazing on a sports model. We also wonder why the steering wheel is so tilted forward. In an Estafette, it’s fine, but not here. However, we are not going to hide our pleasure, because the 5 Alpine is eaten like a sour candy : once you’ve started, you don’t want it to stop. It must be said that we do not get bored driving this bombinette traction. We live with the mechanics, we vibrate with the body and we appreciate the homogeneity of the whole.

The small atmospheric four-cylinder with double-barrel Weber carburettor shows a raging character, taking advantage of the lightness of the car (850 kg) to take turns without complaining. But do not expect a kick in the buttocks at the depression of the accelerator (there will be the 5 Alpine Turbo in 1981 for that), and the performances are ultimately unspecified. Once you’ve accepted the body roll when cornering, you gain confidence and you notice that the car sits well on its small 13-inch wheels which courageously cling to the required trajectory. The easy-to-dose brakes are a pleasant surprise, not the steering. A bit heavy in bends, “truckish” in manoeuvre, it also has a lot to do with the lazy front axle when changing course.

The badly guided box control (especially 5-4) also points to the rank of faults that we forgive today for this granny of the GTIs, because we now prefer to lead her with love rather than beating drums. It must be said that this 5 Alpine has become a “must have” of the youngtimer movement. We will no longer ask him for the moon or repeat the match with a Golf 1 GTI, against which the French had no weight because of a less successful design. As a former Golf 1 GTI owner, there is a world between these two cars. It will also be necessary to wait for the Peugeot 205 GTI (1984) and Superfive GT Turbo (1985) for a tricolor bombinette to make the German waver.

What remains today of this heritage of the 5 Alpine at Renault? It’s fast: nothing. The Clio RS died out with the fourth generation of the model (2012-2020), ending the era of small thermal bombinettes in the Renault catalog. The latest Clio 5, which we brought to this photo shoot, still peaks at 140 hp. However nothing is comparable, if not its Valencia orange color echoing the bright colors of the first R5. Finally, there is indeed a Clio 5 RS Line in the range, but it is only a finish that has no sporting pretensions.

The following ? It is electric, since the future R5 E-Tech will have a sporty version which should be called Alpine A5. The story begins again. We wish Renault developers to find the magic recipe that will make a sporty electric car love apart from a “record” 0 to 100 km/h which we don’t care about, because it is neither the reflection of a mechanics of character nor the expression of a communion with the car. An alchemy that the 5 Alpine was able to achieve in its time.

The saga of the 5 Alpine (and 5 Alpine Turbo which took over in 1981) marked a whole generation of enthusiasts of small sports cars. And it is to be believed that these motorists have worn them out these bombinettes, because there is not much left on the second-hand market. However, there were some 56,000 R5 Alpines produced between phase 1 (1976-1979) and phase 2 (1979-1981), which was distinguished by a more modern dashboard and “petal” front seats. Of course, rust, a real scourge on the bodies of this era, also went through this and sent a lot of models to the scrapyard.

Result: there are very few Alpine 5s on the second-hand market. Between the €2,000 model on which everything has to be redone, provided you can recover the generally lace body, and the offer at €20,000-25,000 for a version in perfect condition with history and expertise, the gap is tall. The small French bombinette therefore does not escape the inflationary madness affecting the youngtimers sector. It is deserved but discouraging for many enthusiasts. As for our 5 Alpine phase 1, it is not for sale. It stays warm in the collection of Renault Classic, because there are not many left in such a state of conservation.

Covid-19: the departments where the number of new cases is exploding