Researchers have brought new insights into how memory works in healthy elderly subjects, thanks to transcranial electrical stimulation, a non-invasive and painless method. 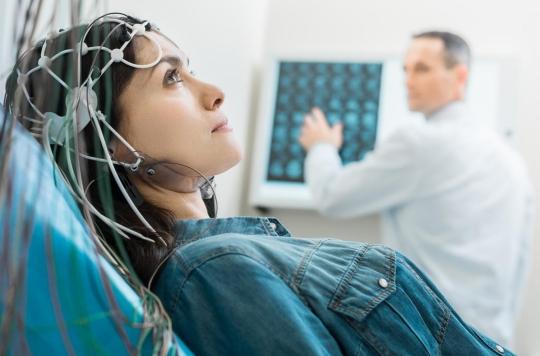 Electric current to the rescue of memory?

According to a study published Monday in the journal Nature Neurosciencea non-invasive technique using microcurrents, administered through a flexible helmet equipped with electrodes, would indeed increase brain performance.

The Boston University team of Pr Robert Reinhart used a subtype of transcranial electrical stimulation, called “alternating current” (tACS, transcranial alternating current stimulation), known and used experimentally for a good ten years, to try to improve the memory capacities of adults aged between 65 and 88 years in good health and not presenting cerebral pathologies.

The 60 participants lent themselves to a session of twenty minutes of stimulation per day for four days in a row. During these sessions, different areas of the brain were targeted and two types of current tested, one at low frequency (4 Hz) and another at high frequency (60 Hz). Patients had to memorize five lists of twenty words and then had to return as many of them as possible.

The results showed an improvement in memory functions from the second day of the trial.

“What is particularly interesting in this work is the demonstration that the type of memory that is “boosted” depends on both the stimulation zone and the type of current used, commented in Figaro Antoni Valero-Cabre, research director at the Paris Brain and Spine Institute (ICM) who is currently evaluating tACS in patients with visual loss after stroke.

“This brings us new elements of understanding of the functioning of memory in elderly but healthy subjects. However, we must not forget that it is the observations in healthy subjects that then make it possible to move towards therapeutic solutions..”

According to the researchers, the working or immediate memory, which makes us remember the subway stop where to get off to go somewhere for example, is improved by stimulation with a low-frequency current and aimed at the cortex. parietal.

“People who had the lowest memory abilities before the stimulation showed the greatest improvements“, indicate the researchers, which could open the way to a therapeutic management of patients with degraded memory functions.

Moreover, these observed improvements persisted during the test carried out one month after the series of stimulations.

In a press conference, Shrey Grover, first author of this work, declared to be “very optimistic“as to the possibility that this effect could last beyond a month.

How Breathing Shapes Our Brain

Early riser or night owl: what impact on intellectual abilities?

Nap: at 3 years old, why do some children no longer want to take it?

Anesthesia in children: what consequences for their brain?

Horror Movies: Why Do Some People Like To Scare Themselves?