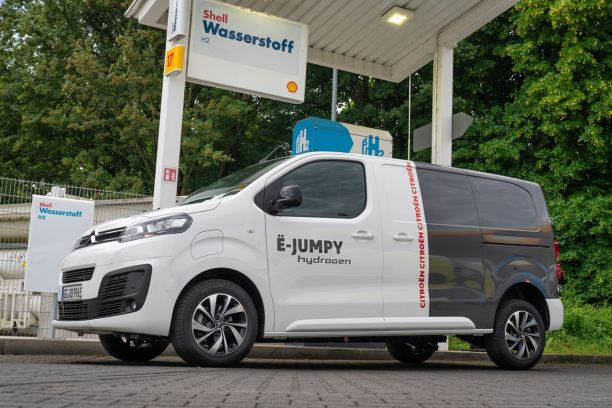 The Citroën ë-Jumpy is converting to the fuel cell, but France currently only has around fifty hydrogen stations.

The fuel cell Citroën ë-Jumpy can drive electric for 400 kilometers and refuel in a few minutes. But the hydrogen distribution network is embryonic, and the sale price is that of a luxury limousine: €116,000 excluding VAT!

The Citroën ë-Jumpy and its close cousins ​​the Opel Vivaro-e and Peugeot e-Expert are compact electric vans that are fun to drive and offer interesting performance. Their biggest flaw remains the time required to recharge their batteries, namely several hours. A period of time that may limit certain uses. To remedy this problem, the Stellantis group has developed a version equipped with a fuel cell. The latter transforms the hydrogen in the tanks (4.4 kg of hydrogen under pressure at 700 bars) into electricity when the vehicle is in use. Undeniable advantage: it only takes a few minutes to fill up with hydrogen, as for a conventional combustion engine vehicle… provided, however, that you find a recharging station. Because France has only about fifty pumps throughout the territory.

Externally, these hydrogen-powered models are identical to the 100% electric versions. Only the logos or any stickers such as those in the photos illustrating this test make it possible to differentiate these fuel cell versions. Only one finish is available, based on the Club at Citroën and on the Premium at Peugeot (the Opel Vivaro is not yet distributed in France). But it allows you to enjoy satisfactory equipment, including front airbags, air conditioning, cruise control / speed limiter or even the automatic activation of the headlights and windshield wipers.

We might as well immediately address the main pitfall of these models: the selling price. Displayed at more than €116,000 excluding tax (including a 48-month or 60,000 km maintenance contract), the ë-Jumpy Hydrogen and its cousins ​​are twice as expensive as the battery versions and almost three times more expensive than comparable diesel versions. Simply prohibitive prices which are justified by the high technology on board and by the assembly in very small series of these vehicles, at Opel, in Rüsselsheim. Even if Stellantis managers point out that a discount of approximately 15% is systematically granted and that acquisition aid (including the conversion bonus) exists, the acquisition cost of around 90 000 € HT seems unrealistic for most companies.

With its 4.4 kg of pressurized hydrogen at 700 bars, the ë-Jumpy Hydrogen offers a range of 400 km. This data also takes into account the energy delivered by the 10.5 kWh “auxiliary” battery positioned in the driver’s cabin, under the seats. This battery assists the fuel cell during start-up and in certain operating circumstances, thus ensuring a longer system longevity. It can be recharged in 1 hour on a 32 A Wallbox via the socket located in the bumper, at the front left of the vehicle.

Hydrogen tanks are installed instead of battery packs under the load space floor. This allows the ë-Jumpy and e-Expert Hydrogen to offer the same payload volume as the other models in the range, i.e. 5.3m3 in standard format and 6.1 m3 in long version. The tanks have a reinforced structure to provide maximum protection in the event of an accident.

Driving the fuel cell version remains very close to that of the 100% electric versions. We will nevertheless note some “pipe noises” which appear at times, as well as non-existent whistles on the battery versions. The operating silence is however appreciable, while the accelerations are convincing thanks to the 136 hp deployed and the torque available immediately. Top speed is only 110 km/h and is lower than that of 100% electric models (130 km/h). A paradox for a version that allows you to have more autonomy than pure electrics and to venture more easily out of towns.

The energy recovery system allows the auxiliary battery to be recharged. It is therefore necessary to drive the ë-Jumpy Hydrogen like a real electric car in order to maintain the charge level of the latter thanks to kinetic energy. At this little game, it is really possible to have more than 400 km of autonomy, as proven by our handling of about fifty kilometers. At the end of our journey, we indeed managed to bring back the ë-Jumpy Hydrogen with a range greater than that displayed by the on-board computer at the start.

Filling up hydrogen tanks is simple and easy, just like filling up with LPG. Three or four minutes is enough. The only condition: find a recharging station nearby, even if it is possible, in the event of a hydrogen fuel cell, to drive with the auxiliary battery for a maximum of fifty kilometres. The price per kilo of hydrogen, at around €10, is close to the fuel costs of the diesel versions. However, it seems destined to become more and more competitive in the face of the regular increase in the price of fossil fuels, even if we know that this will not be enough to compensate for the extraordinary acquisition price.

Stellantis is getting ahead with this hydrogen utility. It is quite simply the only offer on the market. The next model to adopt this technology should be the Master E-Tech Hydrogen, developed by Hyvia and planned for the start of the next school year. If this technical solution of the future can circumvent the problem of the hydrogen distribution network via captive fleets, its price is currently insurmountable for professional buyers of this type of vehicle.

AtremoPlus: Find your energy and vitality naturally for the start of the school year!

10 tips for losing weight at a low price!

Statement: a basic price for ‘normal’ drinking water consumption and a higher rate for the extras

Statement: I hold my heart for the energy costs in the coming winter

10 energy and climate experts to understand what awaits us