Alzheimer’s: can the disease be detected by looking?

Two types of ocular markers have been identified in people with Alzheimer’s disease. They could become diagnostic tools, less expensive and simpler than current examinations. 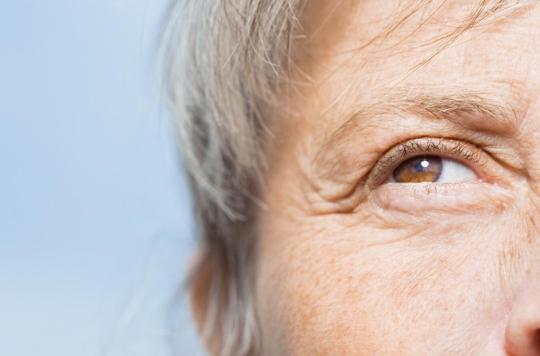 A look says a lot, and not just about your state of mind. According to researchers at the University of Belfast, eye exams can identify signs of Alzheimer’s disease. In Journal of Ophthalmic Research, they explain that peripheral retinal imaging highlights retinal changes characteristic of this pathology. This technique is cheaper and easier to use than brain scintigraphy, which is now used as a diagnostic tool.

Based on laboratory observations, the team hypothesized that changes in the peripheral retina could be of interest in exploring the links between the eye and the brain. Using ultra-widefield imaging technology, scientists have found that there are several changes that appear to be, particularly in the peripheral retina, associated with Alzheimer’s disease. Those affected had more drusen, identifiable yellow “spots” on retinal images. These are small deposits of fat, protein and minerals, including deposits of calcium and phosphate that form under the retina. They are a known symptom of aging and are often seen in people over the age of 40. They are harmless when present in small amounts, but when their number and size increase, they contribute to retinal degeneration.

The authors of this study noticed another ocular characteristic of Alzheimer’s disease: the blood vessels of those affected have a different appearance. Near the optic nerve, these are larger, compared to those of unaffected people. At the level of the periphery of the retina, they are thinner. “Both of these are likely to slow blood flow and impair the flow of nutrients and oxygen to the peripheral retina.”say the researchers in a press release.

According to the authors of this study, this imaging technique could become a monitoring tool “simple, fast and inexpensive” to observe changes in the eye. For patients, it has the advantage of being generally better tolerated. Professor Craig Ritchie, professor at the University of Edinburgh, and co-author of the study, adds : “Changes in the eye are very easy to measure compared to other measures of brain healthThe team is currently continuing its research with a group of patients suffering from an early form of Alzheimer’s disease.