Alzheimer’s: an eye test to detect the disease before the onset of symptoms

Soon, Alzheimer’s disease and other age-related neurodegenerative diseases could be diagnosed using a simple eye test in patients who have not yet developed clinical symptoms. 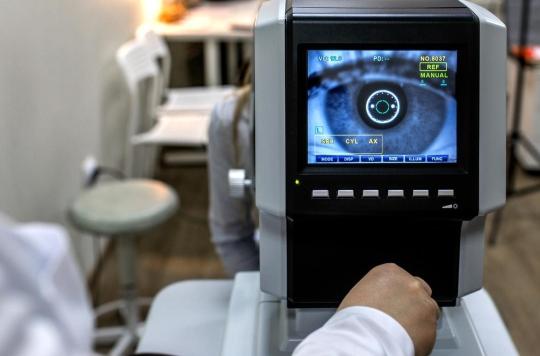 Affecting nearly 900,000 people in France today, Alzheimer’s disease is most often diagnosed when the first clinical symptoms appear. Those affected then begin to forget or act abnormally.

Affecting brain functions, in particular memory, attention and language, Alzheimer’s disease is caused by an abnormal accumulation of beta-amyloid protein in neurons, which leads to progressive and irreversible brain damage. . This phenomenon can last up to twenty years before the appearance of the first signs of confusion and forgetfulness.

Hence the importance of detecting the disease early. But these tests most often require expensive brain imaging techniques. A new study by researchers at the University of Otago (New Zealand) could lead to a new early detection system for Alzheimer’s.

In JAMA Ophthalmologyits authors explain that they succeeded in detecting biomarkers of the disease in the retina. “In the near future, it is hoped that artificial intelligence will be able to take an image of a person’s retina and determine if that person is at risk for Alzheimer’s long before they start showing symptoms. and when there is a possibility of treatment to alleviate the symptoms”explains Dr. Ashleigh Barrett-Young, leader of the study.

The study is based on analysis of data from 865 participants whose retinal nerve fiber layer (RNFL) and ganglion cell layer (GCL) were studied when they were 45 years old.

“These findings suggest that the retinal nerve fiber layer may be an indicator of overall brain health, highlighting the potential of optical scans to aid in the diagnosis of cognitive decline”emphasizes Dr. Barrett-Young.

“Given that we haven’t been able to treat late-stage Alzheimer’s disease and that the global prevalence of the disease is increasing, it’s really important to be able to identify people in the preclinical stage, when we still have the possibility of interveningshe adds.

More research is now needed to determine whether retinal thinning predicts Alzheimer’s disease or just the normal cognitive decline of old age. However, these results are encouraging. According to the researcher, they could lead to the use of artificial intelligence “to take a typical optical coherence tomography, performed at an optometrist, and combine it with other health data to determine your likely risk of developing Alzheimer’s disease”.