The symptoms of sleep apnea in children and adolescents should not be underestimated because this syndrome can have important consequences. Explanations. 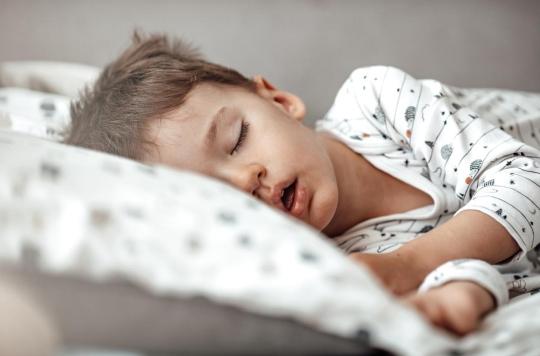 At least 30% of people over 65 are affected by sleep apnea according to theNational Institute of Health and Medical Research (Inserm). Often, it is also adults that we think of when we talk about this syndrome. And yet, children would sometimes be more concerned: “at least one child in twenty”, estimated Madiha Ellaffi, pneumo-allergist during a webinar organized on the occasion of the 22nd National Sleep Day, March 18.

Sleep apnea is a syndrome characterized by repeated and uncontrolled interruptions in breathing during sleep. In general, patients undergo, without being aware of it, micro-awakenings during the night which disturbs their sleep and has consequences in their daily life: from drowsiness during the day, difficulty concentrating or remembering. Some also have cardiovascular complications such as high blood pressure.

More children affected than you think by sleep apnea

One child in twenty is a proportion 100 times higher than that of so-called rare diseases, which means that this problem is ultimately quite widespread in the young population. “Often I hear it said: “Hey, he snores like his grandfather”… No, a snoring child is not normal, ensures Patricia Franco, head of the pediatric sleep unit at the Woman Mother Child Hospital (HFME) in Bron, near Lyon. If the child snores every night, in a prolonged and intense way, you have to think about sleep apnea (…) this message does not pass enough in the families.”

“The micro-awakenings (…) will alter the psychomotor development of the child”

In children and adolescents, sleep apnea can have serious consequences. Indeed, the disruption of nights can lead to chronic fatigue, hyperactivity, lack of attention at school, etc. “It is during REM sleep (dream) that we record the learning of the day, develops André Stagnararehabilitation manager at La Maisonnée, a pediatric follow-up care facility located in Francheville (Rhône). The micro-awakenings associated with low oxygenation will alter the psychomotor development of the child (…) We cannot imagine the lost potential.”

2% of children affected by sleep apnea

According to Inserm, nearly 2% of children aged two to six are affected by sleep apnea. In the majority of cases, this respiratory problem is linked to the presence of large tonsils and adenoids. It is often enough to remove them for the sleep apnea to stop. To diagnose this syndrome, recordings of patients’ sleep should be made in a specialized center or at home.

“Obesity appears to significantly increase the risk of sleep apnea in children and adolescents., believes Inserm. Often, in parallel with treatment, doctors therefore recommend that patients – both adults and young people – have an active lifestyle, which allows them to lose or limit weight gain and, ultimatelycombat sleep apnea.

Alzheimer’s: the French would do the screening test if it existed

Osteoporosis: should screening be generalized?

Autism: soon a screening test from one year?

Snoring after 50: a high risk of sleep apnea in women