Diet: should you have a good breakfast?

Whether the highest calorie intake of the day is at breakfast or dinner doesn’t matter for weight loss and dieting, according to researchers who studied the diet of overweight adults. 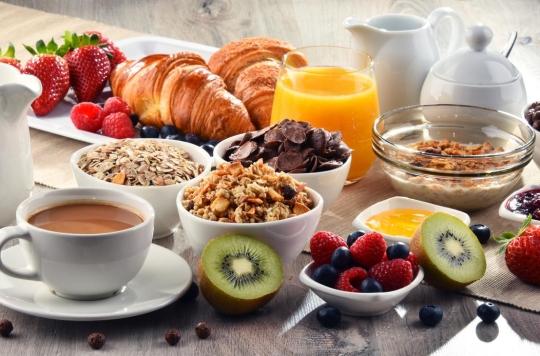 To lose weight, some believe that it is better to eat well in the morning and have a light dinner. But is this belief justified? Not really, according to a study published this Friday, September 9 in the journal Cell. According to the researchers, the time of day when caloric intake is highest does not affect weight loss.

To achieve this result, the scientists put around 30 overweight or obese participants on a high-protein diet. But, these were split into two groups based on when they needed to eat the most.

…even when dinner is plentiful

Result: the researchers observed that there was no difference in weight loss and energy expenditure between the two groups. In other words, no matter when caloric intake was greatest, it did not affect participants’ weight loss. On average, they had all lost – in both groups – three kilos in four weeks.

However, as the participants all tried both groups, they noted one difference: when they ate a large breakfast, their feeling of fullness lasted longer. “Their appetite was better controlled on days when they ate a larger breakfast and (they) felt full for the rest of the day”, explains Alexandra Johnstone, lead author of the study.

To lose weight effectively, the ideal is to combine your diet with the practice of regular physical activity. Note that theWorld Health Organization (WHO) recommends that adults aged 18 to 64 do at least 150 to 300 minutes of moderate-intensity sport or 75 to 150 minutes of sustained-intensity sport per week. And walk at least 10,000 steps a day.

Baby: 7 tips to reduce their exposure to heavy metals

Bad cholesterol: should we remove eggs from our diet?

Why do some children always want to eat the same thing?

Why would the Nutri-Score no longer be sufficient to assess the quality of food?

Thanks to the benefits of nuts, we could have better health

Cancer: why are they more and more frequent in young people?