Death certificate: why doctors no longer want to do it

Doctors who agree to fill out death certificates at home are rare, due to a lack of manpower and remuneration for an act whose regulations remain unclear. 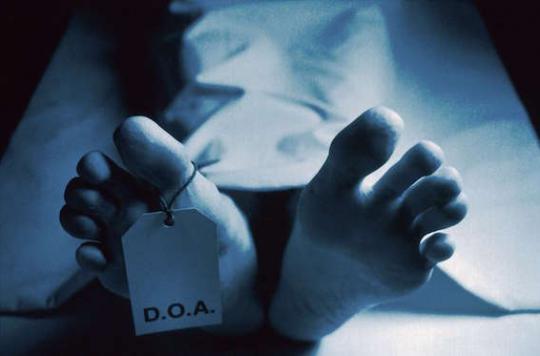 One autumn day, an octogenarian is found at his home, lifeless. The neighbors sounded the alarm; police officers are on site to collect traces and clues confirming that it is a natural death. They contact a doctor, the only one authorized to draw up the death certificate, and await his arrival. One hour, two hours. Five hours.

In Nancy, this strange situation occurs regularly. “Right now, it’s three to four times a month,” sighs Abdel Nahass, departmental secretary of the SGP-Police-FO Unit union. It is not possible anymore. Our teams take strong psycho-social risks by staying for hours near a corpse. And when they are thus mobilized, they cannot work on other files ”.

Abdel Nahass, Departmental Secretary of SGP-Police-FO Unit: ” This summer, we waited for hours near a body, in a heatwave… When we returned it to the family, it was in very poor condition. “.

In this town of Meurthe-et-Moselle, as elsewhere in France, establishing a death certificate at home is sometimes a Chinese puzzle. Formerly, this mission fell to the registrar, but with the disappearance of this profession in the early 2000s, it was transferred to the liberals.

With many difficulties. In fact, practitioners who agree to fill out the famous blue paper are becoming increasingly rare in the territory. And for good reason: the act is not remunerated, since the Health Insurance only covers the care provided to the living. This gesture, based on the generosity of attending physicians, is not part of the Permanence of Care (PDS) which allows regional health authorities to requisition physicians in case of need – for a salary, of course.

In fact, around the certificate, there is a sort of regulatory vacuum that no longer suits general practitioners. “As long as we were doing the big back, nobody cared, notes Roland Rabeyrin, of the MG France union. Except that for reasons of medical demography, the on-call zones have been enlarged according to the reforms. To make a statement, we sometimes have to drive three hours without even being compensated for the fuel! “

Roland Rabeyrin, general practitioner MG France: “ The doctors continue to perform this mission during the opening hours of the practice. Outside, it’s more complicated. “

To compensate for the lack of manpower, the company SOS Médecins has invested in this neglected area of ​​post-mortem medicine. In Meurthe-et-Moselle, for example, it has entered into a partnership with the police, who can request them in order to complete the report as quickly as possible. The remuneration is set by a regulatory text at around fifty euros. When it is the family who calls, then, the doctors charge according to the hour of intervention (from 50 to 80 euros at night and on weekends).

Except that this good understanding seems to be meeting its limits. “When we call SOS Médecins, the first question they ask us is: is the family there? If the answer is negative, then they do not come, ”accuses Abdel Nahass, who suspects the company of seeing only its financial interest.

In fact, recovering your fees from the family seems easier than going through the judicial administration, which can take months, even years, before paying the practitioners of SOS Médecins. In addition, only “unnatural” (suspect) deaths are remunerated, since they induce a judicial requisition. “We have traveled so many times for the police to conclude that we are natural dead and send us home,” recalls Joseph Fabre, president of SOS 54. In the absence of requisition, we are not required to move. Nobody in France works for free! “.

Joseph Fabre, president of SOS Médecins 54: “ We made this agreement to be of service, so there is no requirement for a doctor to come when the police call. “

Living in the morgue?

This summer, during the heatwave episode, the situation reached such a critical point that the Nancy public prosecutor’s office authorized judicial police officers (OPJ) to requisition forensic pathologists and to order the transport of the body to the morgue of the ‘Institut Médico-Legal by a funeral director.

An exceptional device which shocked Abdel Nahass. “In addition to the costs associated with this procedure, in the order of 2,000 euros per death, the risk of sending a living person to the morgue is very real! The coroner comes to see the death several hours after the body has been put in the fridge… But we are not doctors! The person may as well be in a coma! “

The Lorraine situation is far from isolated. Everywhere in France, difficulties accumulate around the declaration of death. “Sometimes, it is a vehicle of the Samu which must move because no doctor deigns to do so, fulminates Christophe Prudhomme, spokesperson for the AMUF (Association of Emergency Hospital Doctors of France). It’s € 350 per half hour for the car, and that’s not our role. The State does not ensure this public mission ”.

Talking about money around a corpse can be shocking. Yet this is the crux of the matter, and it would be difficult to cast a stone on those who demand compensation for labor. The state is well aware of this. Amendments to the health bill and the Social Security financing bill (PLFSS) have been tabled in order to integrate the death certificate into the Permanence of Care, or to set up a lump sum payment.

Prison: one in two deaths is suicide

Accumulation of fat on the stomach could cause sudden death

Uvesterol D: a drug under surveillance

Uvesterol D: the reasons for a suspension

Consumption of vegetable protein reduces the risk of premature death

Carrie Fisher: Did her death cause her mother’s death?