Children can sometimes learn faster and more effectively than adults. In question, a difference in neurotransmitter, according to a new study. 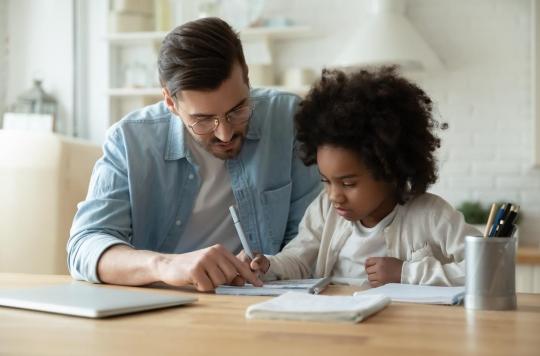 Have you ever felt like your 8-year-old is sometimes smarter than you, an experienced parent? A new study suggests it’s not just an impression: “Children of primary school age can learn more information in a given amount of time than adults, which makes learning more efficient for younger children”, says Takeo Watanabe, a researcher at Brown University (USA). He and his team think they’ve found why: a neurotransmitter, called GABA, that doesn’t work the same way in children and adults.

Differences in the processing of visual learning

To reach these conclusions, published in the journal Current Biology, scientists studied the brains of children and adults using neuroimaging techniques. The objective, to see how GABA levels (which had been the subject of previous work on the same subject) change before, during and after learning, and how this differed between the two generations.

Results, schematized here : during learning – in this case visual – children have a rapid increase in GABA in their cerebral cortex (which processes visual information), an increase that lasts even several minutes after the end of the “lesson”. In adults, although they receive the same information, it is significantly different: GABA concentrations remain constant, there is no change in the neurotransmitter. According to the researchers, children’s brains react to information in a way that allows them to “stabilize new learning faster and more effectively”.

A discovery which, according to them, could change the conception that neuroscientists have of brain maturity in children. Certainly, the brain of the little ones is not yet fully mature, and many of their functions (such as cognitive control or attention) are not as effective as in adults. But “children have, at least in certain areas such as visual learning, superior abilities to those of adults”explains Takeo Watanabe in a communicated. Proof, according to him, that “GABA processing implicated in different aspects of cognitive functions may mature at different speeds”.

Researchers hope this will further encourage teachers and parents to give children “opportunities to learn new skills, whether it’s learning times tables or riding a bike”. The latter now wish to explore GABA responses through other less “visual” types of learning, such as reading and writing.

Why does my child have nightmares?

How to help a child who is afraid of the dark?

Education, mental health… Teenagers exposed to violence on television from the age of 3 have more difficulty