Marisol Touraine announced on Wednesday the opening of blood donation to homosexuals. One year of abstinence will be required for a total donation. 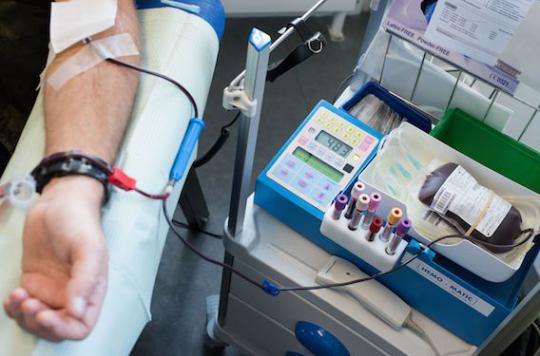 It was a long-awaited announcement: blood donation will indeed be open to homosexuals. From spring 2016, this gesture will be authorized for men who have sex with men (MSM). This modification of the regulations was a real battle horse for the Minister of Health. In a newspaper interview The world, Marisol Touraine develops the conditions that will be put in place to open the donation to this population.

“We can no longer be excluded from donating blood because of our sexual orientation,” she says. She repeats, almost word for word, the amendment to the health bill unanimously adopted by the National Assembly in April 2015. The subject is consensus in the political community, and the minister wants to accelerate the schedule.

4 to 12 months of abstinence

From spring 2016, blood donation will be expanded in several stages. Initially, explains the minister, only MSM who have remained abstinent for a year will be able to donate blood. France is therefore following in the wake of Japan, Australia, the United States and the United Kingdom. A considerable delay, but which eliminates the risk of a contaminated donation. This is because there is a 12-day “silent window” during which HIV is not detectable in the blood.

The constraint will be reduced for plasma donations: MSM in a stable relationship for four months, or abstinent during this period, will be able to donate. This shorter time is explained by the fact that the plasma can be treated which inactivates any viruses. This is not the case for red blood cells.

The questionnaire will be modified

In the interview, Marisol Touraine reaffirms her desire to launch studies on the safety of blood donation by homosexuals. “The first donations will allow us to carry out studies and, if there are no risks, the rules that apply to homosexuals will be brought closer to the general rules the following year,” she explains.
Still in this perspective of security, the questionnaires will indeed be reworked, as announced in March 2015. They will specify “the conditions for homosexuals, but also for heterosexuals who engage in risky practices, for example with prostitutes. »A detail that is currently not mentioned.

#blood donation the questionnaire always evokes the #HSH. According to @MarisolTouraine that should change. @EFS_Officiel pic.twitter.com/CQsfcQuLcj

So far, 9 countries have authorized the donation of blood to homosexuals. The period of abstinence before a donation is variable to say the least. Two states have opted for the very long term, with 5 years without sex in Canada and New Zealand. Portugal is progressive and imposes the same regulations on different sexual orientations. In Italy and Spain, the pear is cut in half, with respectively 6 and 4 months of abstinence. But the most popular model is that of the year of abstinence, which France will follow. It has been adopted by Japan, Australia, United Kingdom and United States.

Jay Franzone: abstinent from sex for a year to donate blood

Zika: all blood donations tested in the United States

Blood donation: the donor’s sex influences the chances of survival

Blood donation: homosexuals subjected to one year of abstinence