INTERVIEW – Alzheimer’s disease tends to decline in rich countries. The drop in vascular risk factors could in particular explain it, according to Professor Amouyel. 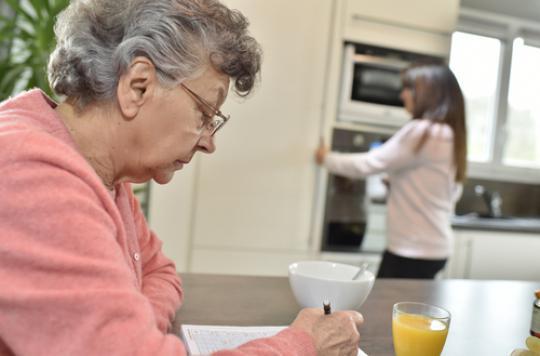 In France, nearly 900,000 people are affected by Alzheimer’s disease or a related disease. Three million French people are even directly or indirectly concerned, whether they are sick or close to those affected.
The 23and World Alzheimer’s Day, which takes place this Wednesday, is a day of gathering and international mobilization for patients, their relatives and caregivers, researchers and health professionals.

But it is also an opportunity to recall some good news in this area. This is the case of the decrease in the incidence of Alzheimer’s disease and related dementias in France. The observation has just been established in the last BEH (1). Among French women, for example, the risk of dementia fell by 35% between 1990 and 2000.
This reduction even remained significant (-23%) when other potential explanatory factors were taken into account. Old data, certainly, but which are confirmed by more recent results in the United Kingdom.

And across the Atlantic, dementia also seems to be marking time among the American population. Contacted by whydoctorProfessor Philippe Amouyel, specialist in diseases linked to aging and researcher at the Institut Pasteur de Lille, explains this decline.

How do we explain this decline?
Professor Philippe Amouyel : There are tracks. First, that of the resistance capacity of the brain which improved the cognitive reserve. This phenomenon is observed in the so-called “rich” countries due to the marked improvement in the education of the populations. Recently, a large Franco-American study suggested that the risk of dementia and Alzheimer’s disease decreases by 20% in older people with a high level of education (since the 1950s).
In addition, cognitive stimulation is also favored by activities such as DIY, gardening and social networks, which are more present in countries with a high level of income. These hobbies also contribute to the development of Alzheimer’s disease later in life.

Are there other risk factors to consider?
Professor Philippe Amouyel : This decline could also be explained by better management of cardiovascular risk factors such as diabetes, cholesterol or hypertension. It would have helped to prevent vascular dementia, but also that of the Alzheimer type.
Conversely, 55% of new cases in the world are diagnosed in low- or middle-income countries (Asian countries in particular). In China, for example, we know that people do not have a healthy lifestyle since about 80% of men smoke.
To try to counter this, the Chinese government already invests 2 to 3 times more than the United States in education. And there is a lot of work to do because these populations have already adopted our bad eating habits and the number of obese people is therefore logically increasing there.