In patients with Alzheimer’s disease, the memory processes that take place during sleep are altered by amyloid plaques. 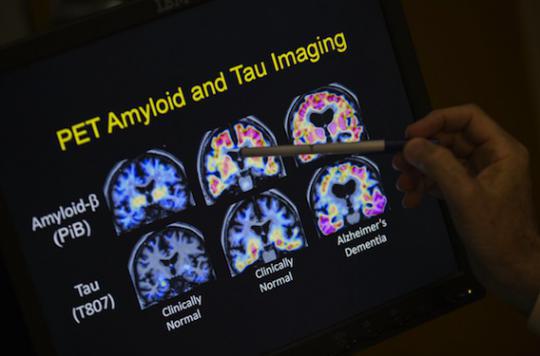 Patients with Alzheimer’s disease often complain of trouble sleeping. For the majority of them, these fragmented nights and bad qualities occur before the memory losses characteristic of the disease. However, sleep plays an important role in memory consolidation. Thus, sleep disorders could themselves have a role in the development of this degenerative disease.

Based on this hypothesis, German researchers have shown for the first time how the lesions observed in the brains of patients alter memorization processes. Using animal models, they were able to decode the mechanisms involved and reduce the disorders using drugs. They publish their results in the prestigious review Nature Neurosciencee.

Memorization processes take place especially during light sleep. During this period, networks of nerve cells in the cerebral cortex generate slow waves which are then diffused throughout the brain. “These waves are a kind of signal that allows different areas of the brain to communicate and indicate that they are ready to receive information to propagate it later”, explains Dr Marc Aurel Busche, doctor in the psychiatry department. and psychotherapy at the Technical University of Munich and responsible for the study.

But in patients with Alzheimer’s disease, the transmission of these waves is disrupted. To understand why, the researchers looked at models of mice with Alzheimer’s disease. These guinea pigs exhibited the same clumps of toxic proteins, known as amyloid plaques or senile plaques, that are seen in human patients. And according to the observations of scientists, it is these plates that weaken slow waves. “They can still be generated but they can no longer propagate correctly”, specifies the researcher.

In addition, scientists have noticed that the transmission and reception of these waves require a perfect balance between excitation and inhibition of neurons. A balance broken by amyloid plaques in the brains of sick mice. Indeed, the latter cause an over-excitation of the cells.

Thanks to this discovery, the researchers were able to test the effectiveness of benzodiazepines, a drug prescribed for insomnia, which inhibits the activity of certain neurons. Administered to a group of mice, the treatment restored wave propagation. their learning and memorization skills.

“These results are arousing great interest for two reasons: first, mice and humans exhibit the same slow waves in the brain, so these results are quite transposable. Second, these waves can be recorded by electroencephalogram, the disturbances could thus be diagnosed at an early stage ”, summarize the researchers.

Alzheimer’s: the benefits of home therapy