Advanced melanoma: virotherapy soon to be accepted in Europe

A virus derived from herpes to treat metastatic melanoma. This virotherapy, now authorized in the United States, should soon be in Europe. 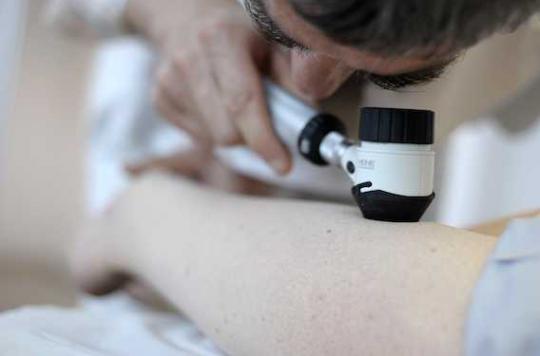 The first virotherapy against melanoma could soon be authorized in Europe. Derived from the herpes virus, this product provides a lasting response in advanced cancers. Survival is improved, while these metastatic forms are often resistant. The argument visibly convinced the Food and Drug Administration (FDA): it granted this October 27 a marketing authorization for Imlygic (talimogene laherparepvec, or T-VEC). The AMM in Europe should soon follow. The file is currently being examined by the European Medicines Agency (EMA). And the organization made it known, October 23, that he was in favor of an authorization.

Injected directly into the tumor

But what is this recombinant virus that arouses so much enthusiasm from the authorities? T-VEC contains a genetically engineered herpes simplex virus 1. “The herpes virus capsule is used as a vector to inject into tumor cells a DNA fragment which codes for the growth factor GM-CSF”, explains Professor Nicolas Meyer, cancer dermatologist at the Toulouse University Hospital (Haute -Garonne), contacted by Why actor.
T-VEC is injected directly into skin lesions that cannot be operated on, but also into nodes that are accessible. A technical requirement that not all patients meet.

The exact mechanism of action is not fully characterized, but two avenues can be put forward. The first is inherent in the mode of injection: the virus enters the tumor cell, uses its energy to replicate and ends up killing it. The second is the genetic modification of the virus, which produces the GM-CSF protein and stimulates the patient’s immune system, thereby destroying tumor cells.
In either case, once the infected tumor cell dies, copies of the modified virus are released into the blood stream and they spread to more cancer cells. This is how the virus could have a diffuse action.

Treatment with T-VEC consists of a series of injections spaced two weeks apart for at least six months. The response rate during treatment is rather significant (16%, or 8 times better than the control group), and survival overall improved. “Infected” patients survive an average of 23.3 months, compared to 18.9 months in the control group.

The question therefore arises of the place of this treatment. Indeed, the therapeutic arsenal is already well stocked. Recently, immunotherapies and targeted therapies have proved their worth. This is precisely what pushes Nicolas Meyer to be cautious. “The subject remains in suspense because we do not have all the data on this treatment, in particular the efficacy in terms of overall survival,” weighs this onco-dermatologist. For now, this treatment is used in patients who have debilitating or numerous subcutaneous metastases, for whom we seek to have control. A locoregional effect therefore. In clinical trials, the effect of T-VEC is particularly marked in patients whose cancer is advanced (stages IIIB, IIIC, IVM1) and has never known other treatments. And these “naive” patients are not the only ones who can benefit from this recombinant virus.

Metastatic melanoma is known to be highly resistant to treatments, including immunotherapies. “We still have patients who are resistant to immune and targeted therapies. We therefore need additional treatments, explains to Why actor Dr Marina Thomas, cancer dermatologist at the Gustave-Roussy Institute (Villejuif, Val-de-Marne). With T-VEC, we hope to have an action either in patients for whom the available therapies are not effective, or in addition to treatments to further stimulate the immunity of these patients. “

Combination with other treatments is arguably the future of T-VEC. Trials have already been launched to assess the impact of a combination with immunotherapies: ipilimumab, the reference treatment, and its challenger, nivolumab. The first results should fall within 6 to 18 months.

But Nicolas Meyer has his idea on the strategy to adopt against T-VEC, which is no longer necessarily the weight in terms of survival against immunotherapies. “The most intelligent strategy would be perhaps, when one has isolated lymph node metastases, to treat beforehand with the T-VEC, to give it time to act then to initiate a resection surgery, hoping that the treatment induced a global immune response, ”he said.

These encouraging results are tempered, as is often the case in oncology, by the price of such a treatment. The Amgen laboratory, which produces the T-VEC, estimates its cost at 65,000 dollars (59,800 euros). “65,000 dollars for a loco-regional control, it has no relevance if we can do the same thing with a surgery which costs less than 1,000 dollars. If at present, studies around this treatment do not provide additional information, it is a treatment that will have very little place in the melanoma treatment strategy, says Nicolas Meyer. The price is only acceptable if the result is there. ”
On its own, nivolumab represents a cost of $ 103,220 across the Atlantic (€ 95,000). A cost deemed acceptable in view of its excellent results in melanoma, but also lung and kidney cancer.